The art of creating perfumes dates back to Egyptian times and has gone through some pretty interesting transformations since then. We’ve gathered nine of the most mindblowing facts about perfumes for your reading pleasure, so keep flipping through!

1. Strange Beginnings: Ambergris is one of the most valuable raw materials in perfumery, used as an ingredient with a smell that’s described as ocean-y and sweet. It also happens to be produced in the intestines of sperm whales—who knew whale vomit could be so fragrant? Nowadays, perfumes like Dolce & Gabbana’s Light Blue Escape to Panarea ($75) include synthetic versions of this rare ingredient.

2. You’re Spraying It Wrong: You hair—not your skin—might actually be the best place to spray perfume. Because of your scalp’s oiliness, it will actually keep scent longer than your skin will. Also, because it’s always in motion, it can actually diffuse the scent more easily.

3. Your Nose Doesn’t Know: Apparently, your nose gets used to your signature fragrance, and you can only smell it when it’s first applied or when you consciously pay attention to it. Lesson: do not over-spritz for the sake of those around you.

4. Must-Have Musk: Did you know that musk is actually potent, reddish-brown substance secreted by male musk deer? Since it requires killing an endangered animal, it’s rarely used for perfume today—instead, perfumers use materials that mimic traditional musk, like ambrette or synthetic raw materials.

5. Eau de Cigarette: In 1921, Molinard released a fragrance called Habanita that was intended to scent cigarettes. You placed the satchels in your cigarette case, or applied it directly to your cigarette in liquid form for a “delicious, lasting aroma.” And you thought e-cigarettes were fancy!

6. Million Dollar Nose: Jean Carles, a famed French perfumer who created scents such as Miss Dior, was said to have insured his nose for one million dollars.

7. Jasmine—Or So You Thought: Many jasmine notes in some fragrances are actually produced by using a synthetic material named Indole, which is derived from—wait for it—coal tar. When used in a low concentration, it has a sweet, flowery smell.

8. For The Bacon Lover: In case you wanted another way to enjoy your favorite breakfast food, you can now wear it. Bacōn by Fargginay ($36) was started in 1920 by a Parisian butcher who realized he could dramatically lift his customers’ mood with a blend of 11 essential oils plus the essence of bacon.

9. Expensive taste: The most expensive perfume in the world is Clive Christian’s Imperial Majesty, priced at $215,000 for 16.9 ounces. It’s served in a Baccarat crystal bottle with an 18-carat gold collar and five-carat diamond.

10. Queen Bey Heats Up: As of last year, Beyoncé’s special edition fragrance Heat Mrs. Carter ($60) is the best-selling celebrity fragrance of all time, raking in over $400 million globally. #Flawless

11. Humble beginnings: Chanel No. 5 ($98)—one of the best-selling perfumes of all time and the only one Marilyn Monroe famously said she wears to bed—had a surprising start. Coco Chanel came from humble beginnings—her mother was a laundry woman—so the smell of soap and freshly scrubbed skin was something that stayed with her years after. Chanel No. 5 was the first perfume she selected from the ten samples perfumer Ernest Beaux’s presented, and the first perfume to be made with aldehydes, a synthetized component of an organic compound that just so happens to smell like—you guessed it—soap.

Perfume 101: Everything You Need To Know About Fragrances

As someone who worked for years in luxury fragrance retail, I know the power that perfumes have on people. Scents...

How Woman’s Arousal Work and How Sex Toys Can Help

Woman’s Arousal Begins in the Mind Even though we can’t say for sure what’s happening in our minds once we... 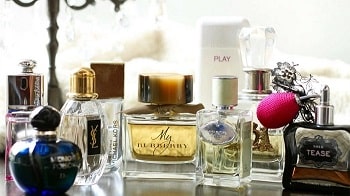 Everything You Should Know About Perfume

This website uses cookies to improve your experience while you navigate through the website. Out of these cookies, the cookies that are categorized as necessary are stored on your browser as they are as essential for the working of basic functionalities of the website. We also use third-party cookies that help us analyze and understand how you use this website. These cookies will be stored in your browser only with your consent. You also have the option to opt-out of these cookies. But opting out of some of these cookies may have an effect on your browsing experience.
Necessary Always Enabled
Necessary cookies are absolutely essential for the website to function properly. This category only includes cookies that ensures basic functionalities and security features of the website. These cookies do not store any personal information.
Non-necessary
Any cookies that may not be particularly necessary for the website to function and is used specifically to collect user personal data via analytics, ads, other embedded contents are termed as non-necessary cookies. It is mandatory to procure user consent prior to running these cookies on your website.
SAVE & ACCEPT
0 shares